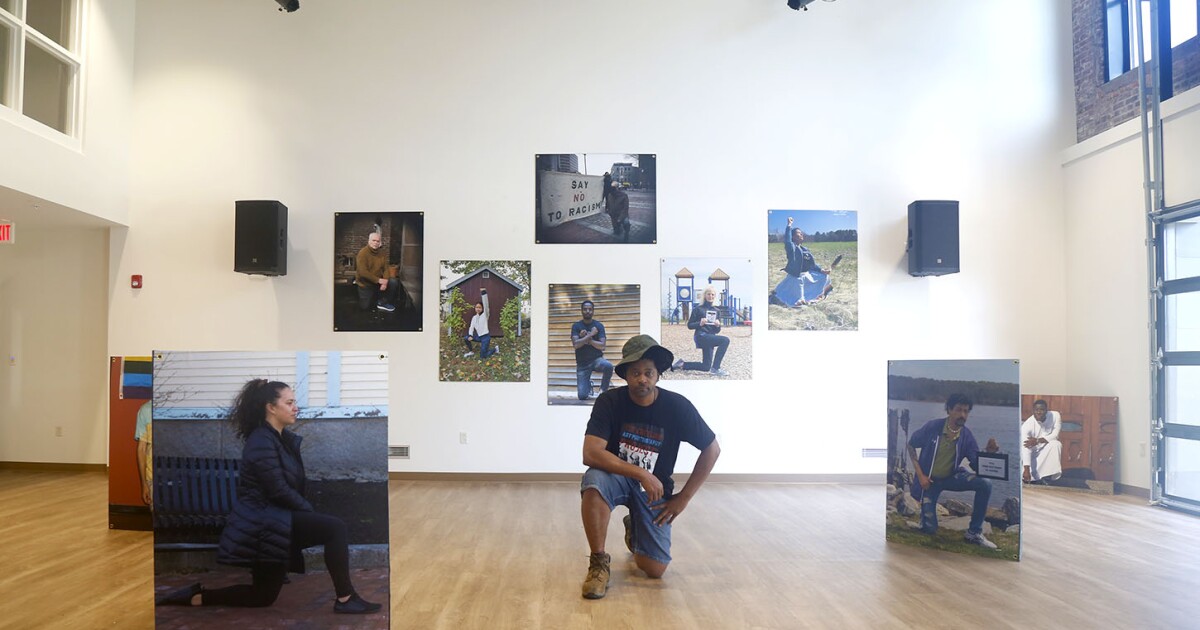 When artist Titi de Baccarat first saw someone kneel down as a cultural gesture in the United States, he was both confused and captivated. He saw a man kneel down, open a small box and ask a woman to marry him – a tradition that people in his home country, Gabon, did not practice.

“I was shocked that the same symbol of love, the same powerful symbol that Americans use to start a family, to express love, to get married… the same gesture, someone uses it to take the someone else’s life, ”said de Baccarat. .

After Floyd’s death, de Baccarat took to the streets to protest for the first time in his life and witnessed kneeling as a form of activism. De Baccarat moved to Portland, Maine in 2015 as a refugee claimant and has been active in the Portland arts community ever since. Inspired by the symbolic power of kneeling in these varied contexts, he began to ask people around him what it meant to them. The responses he got led him to launch The Kneeling Art Photography Project. The project “aims to promote humanist and social action in Maine communities in response to local issues of racism and injustice,” according to the website.

He recruited nine other photographers from Maine, who together took more than 100 photos of kneeling Mainers. Rose Barboza, founder and co-director of Black Owned Maine, is one of the photographers. She grew up in Lewiston and says the project is important for showing the diversity that exists across the state.

“It shows the vastness of Maine, because a lot of times Maine is portrayed as, ‘Oh, it’s 94% white, you know, we’re not talking about the remaining 6%, it’s such a small number.’ And I think it’s really important for projects like this, and for the organization that I lead, to talk about the diversity that exists here. We don’t just erase it, ”says Barboza.

Barboza says the Kneeling Art Photography Project also emphasizes the importance of recognizing the entry points of de Baccarat and other immigrants into conversations about racial justice in the United States.

“America is built on immigrants and immigrants built this country,” says Barboza. “I think it’s really important to recognize that just because you weren’t born here doesn’t mean your experience isn’t valuable. Titi creates art from what he sees and experiences, and I think it’s great that he’s able to break down a lot of those walls.

De Baccarat says many people assume the project started with Colin Kaepernick, the former National Football League quarterback who first knelt during the national anthem before a game in 2016 and started a national conversation about racial injustice. But de Baccarat says he didn’t know Kaepernick, or the context around taking a knee as a form of American protest, until he saw it firsthand last summer.

For photographer Ann Tracy, the project has become a way to show solidarity with communities of color. Tracy grew up in Maine and then lived in other parts of the country for many years before returning to the state in 2011. When she returned, she said she was excited to hear more. on all the immigrant communities who settled in Maine. .

“I think that was the start of my awareness of why this type of project is necessary, to show people a positive approach from all races and religions working together,” said Tracy. “As artists, whatever type of art form we deal with, everything we do is a reflection of who we are in the society we live in. I think if we can show ourselves things that we haven’t seen in a particular light before can help us become fully listening human beings.

And project photographer John Ripton says he thinks it’s important to talk about institutionalized racism as a white person. Ripton grew up in a small town in central Maine, where he says he saw virtually no ethnic or racial diversity, or any public discussion about it.

“When you do a project like this, I think it actually moves people from one job to another. It makes it easier for you to recognize, and sometimes even confronts you with ideas and a reality that you may not see on a daily basis, ”explains Ripton.

Each photograph in the project is accompanied by a statement written by the model explaining why they chose to kneel down.

“I think whatever your political beliefs you might find a paragraph or a model in this room to resonate with, [because] the statements are so different, ”says Barboza.

The project has already been exhibited at two locations in Portland and Baccarat and Barboza are hosting the third exhibition at the Arts Collective at 18 Main Street in Waterville this week. On July 9, there will be a special exhibition at the Railroad Square Cinema on the opening night of the Maine International Film Festival. The Kneeling Art Photography Project is teaming up with LumenARRT !, a collective of video artists, to create an installation that will present photos of the project. The gallery exhibition will be in place for the duration of the festival.

So far, photographers say the community response has been powerful. When activist and community organizer Tori Lyn saw the exhibit in Portland, it moved her to tears.

“I didn’t expect to have that level of emotion, but just to see all these different humans, different backgrounds and different kneeling experiences and say, ‘this is what that means to me’, whatever stand in solidarity with Black Lives Matter, and with the black men and women who have been murdered and injured over the years, or if it was their own personal story of growing up as an underrepresented or marginalized person ” , says Lyn. “It was powerful to walk around and see all the different types of experiences coming together for a collective cause.”

Lyn is the Special Projects Coordinator for the Greater Portland Council of Governments, focusing on racial equity and economic development.

“I think there is a common misconception about what activism really is and what it involves,” says Lyn. “Each person has a level of activism that they do or not [recognize], and that they are very, very capable of doing. I think art and photography are a great example of this.

The exhibit will travel to Orono in September for another community show and workshop, and de Baccarat says he has already received other invitations to come to Augusta and Kittery. And De Baccarat says that a possible book, “Taking a Knee For Change”, is in the works.

Barboza hopes the project will inspire Mainers to take the next step in advancing racial justice.

“Obviously over the last year there has been this awakening of racial social justice,” Barboza said. “But for black people, for people of color, it’s still a work in progress. So let’s listen to their voices and center those voices to make sure we’re talking to people who are actually going through the experiences. And I really hope that this project will allow people to feel really connected, to make it human, to make it more accessible.

Throughout the project, de Baccarat says he learned a lot about what the knee can mean to different people, such as when he photographed Jeannie Toppi, who had his leg amputated.

“She said to me: ‘Titi, I want to be part of your project.’ And I wondered how she could be, because she only has one leg, ”recalls Baccarat.

In his statement, Toppi writes: “I feel on my knees, deep in my heart, but physically I have to stand up, to represent my grandchildren, who are black and to end racism and ensure social justice for them. , and all the other minorities who are daily oppressed.

“It was from her that I learned that kneeling is not only a physical gesture, but that you can also kneel with your heart,” says de Baccarat.

Art photography at its best in monochrome